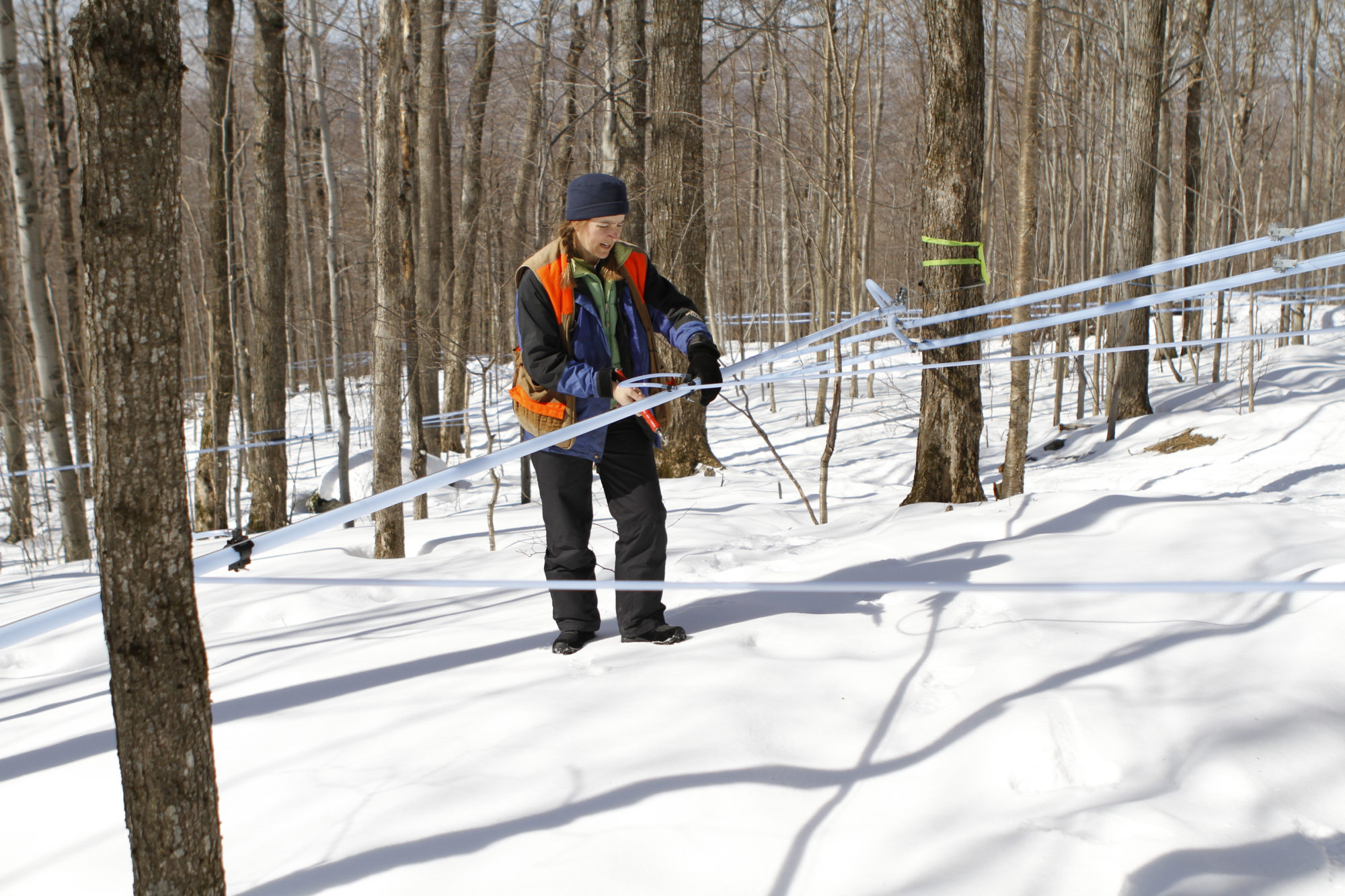 Journals of early explorers indicate that Native Americans had a process for making maple syrup as early as the 1600s. But surely, none of them made Sparkle Syrup.

Tapping into a tradition as old as Vermont, Runamok Maple founders Laura and Eric Sorkin are bringing creativity and innovation to an industry that has long relied on the simple perfection of its product.

“Trying to sell a jug of syrup in Vermont is hard,” said Eric Sorkin. “Everyone has an uncle or neighbor who they rightfully love and who makes the best maple syrup. It’s not easy to break into that space. Where we saw an opening was in creating a national brand focused on design and innovation. When we launched Sparkle, we kind of wondered if we had jumped the shark. But that product is pure joy.”

Sparkle Syrup is maple syrup infused with pearlescent mica that adds a shimmer to morning pancakes and has earned the company mentions in the Boston Globe and Entertainment Weekly, among others. A media darling, Sparkle Syrup’s endorsements on the national stage are only the most recent for Runamok. In 2016, the company’s Maple Syrup Gift Box, which includes Barrel-Aged, Hibiscus Flower, and Vanilla + Cinnamon Infused maple syrup, was chosen by Oprah for her infamous holiday gift guide. More recently, Runamok earned two Good Food Awards this year for their Smoked Old Fashioned Maple Cocktail Syrup and Orange Maple Bitters.

It all starts in the forest.

While Sorkin acknowledges that tapping into culinary trends and creating a strong national brand were always part of the plan for Runamok, starting a maple business was first inspired by an 800-acre piece of forest land on the side of Mt. Mansfield.

Both Eric and Laura were working in environmental advocacy, but Laura dreamed of living closer to the land and operating a diversified vegetable farm. “She was really interested in growing vegetables,” said Sorkin, “and I was interested in following her. So, we moved to Vermont.”

The couple gave diversified farming a go, but soon realized that the 800-acre parcel of forestland they owned in Cambridge, VT. offered financial opportunity beyond what they were able to realize through growing vegetables. “We had always talked about maple,” said Sorkin. “It was secondary to farming at first, but as we looked into it, we realized that we had a really valuable asset.”

The parcel had been virtually untouched for 50-60 years and required some initial clearing to open the forest canopy and remove patches of diseased trees. In addition to maple production, the Sorkins partnered with Audubon to ensure their forest management would protect important bird habitat. The Cambridge parcel and another piece of forestland the couple co-owns with the DesLauriers family in Bolton, is open to recreation and home to mountain biking, cross-county skiing, and VAST trails.

In 2009, the Sorkins tapped their first maples. The entire marketing plan, said Sorkin, consisted of a 15-minute phone call to Butternut Mountain Farm, who agreed to buy all the maple the Sorkins could produce. “At the time, we were strictly a commodity producer,” he said. “With our experience in farming we saw two potential paths. One was to be small and nimble and make enough syrup to pay for our own labor, and the other was to be big enough to pay for labor.”

The Sorkins chose big. Starting with 28,000 taps in 2009, the company now has 120,000 taps in Cambridge and Bolton, and relies on a network of smaller producers around the state including Branon Family Maple Orchards, Ledge View Maple, and Sidelands Sugarbush, among others. They launched their brand, Runamok Maple, in 2016 and now essentially run two businesses: maple syrup production and consumer food manufacturing, the latter of which has dwarfed the original commodity business.

“I’ve always believed strongly in the working landscape,” said Sorkin. “When we first purchased the property, the hurdle for us before sugaring was the aesthetic impact of populating the woods with a pipeline of tubing. I’m way over that now. I have a different lens looking at the forest and I love the way we fit into it.”

The Sorkins take a long view of the benefits of the maple industry on Vermont’s forested working landscape. Beyond providing a market for small producers to sell their syrup, Sorkin, a lawyer and environmental advocate, sees maple as a vehicle for better forest management. “Parcelization is a real threat to Vermont’s forests,” said Sorkin. “Maple is a bright spot where people are aggregating land holdings and making them viable for long term commercial operation. It’s not driven by a specific conservation model; it’s driven by economics.”

Income-producing forest land, whether through maple, timber harvesting, recreation, or some combination thereof allows landowners to hold onto larger parcels, rather than selling land off for development. The fact that 80 percent of Vermont’s forested land is privately owned puts a finer point on the importance of economic models that allow landowners to keep larger parcels of forest intact.

“More and more, I feel like we’re not competing with any of the other packers in the state like Highland Farms or Butternut Mountain Farms,” said Sorkin. “We’ve added to the market. People are buying our products and pure maple syrup, not one or the other.”

True to their initial strategy of bringing creativity and innovation to Vermont’s maple syrup industry, the company continues to invest in new products and branding. “We spend a lot of time talking about different ways you can use maple,” said Sorkin.

To date, those “other uses” have included infusing maple syrup with coffee, chili peppers, ginger root, and Makrut lime-leaf and creating an extensive library of recipes to guide customers toward trying maple syrup on everything from chicken wings to breakfast sandwiches. The company also launched a line of cocktail mixers and bitters, advocating for maple in place of simple syrup.

And that added market means more income for Vermont maple producers. “The function that we now fit,” said Sorkin, “is providing a place, along with other packers in the state, for anyone who is making syrup to sell it.”

“And” he adds, “making maple syrup is magic. This business checks every box for me.”