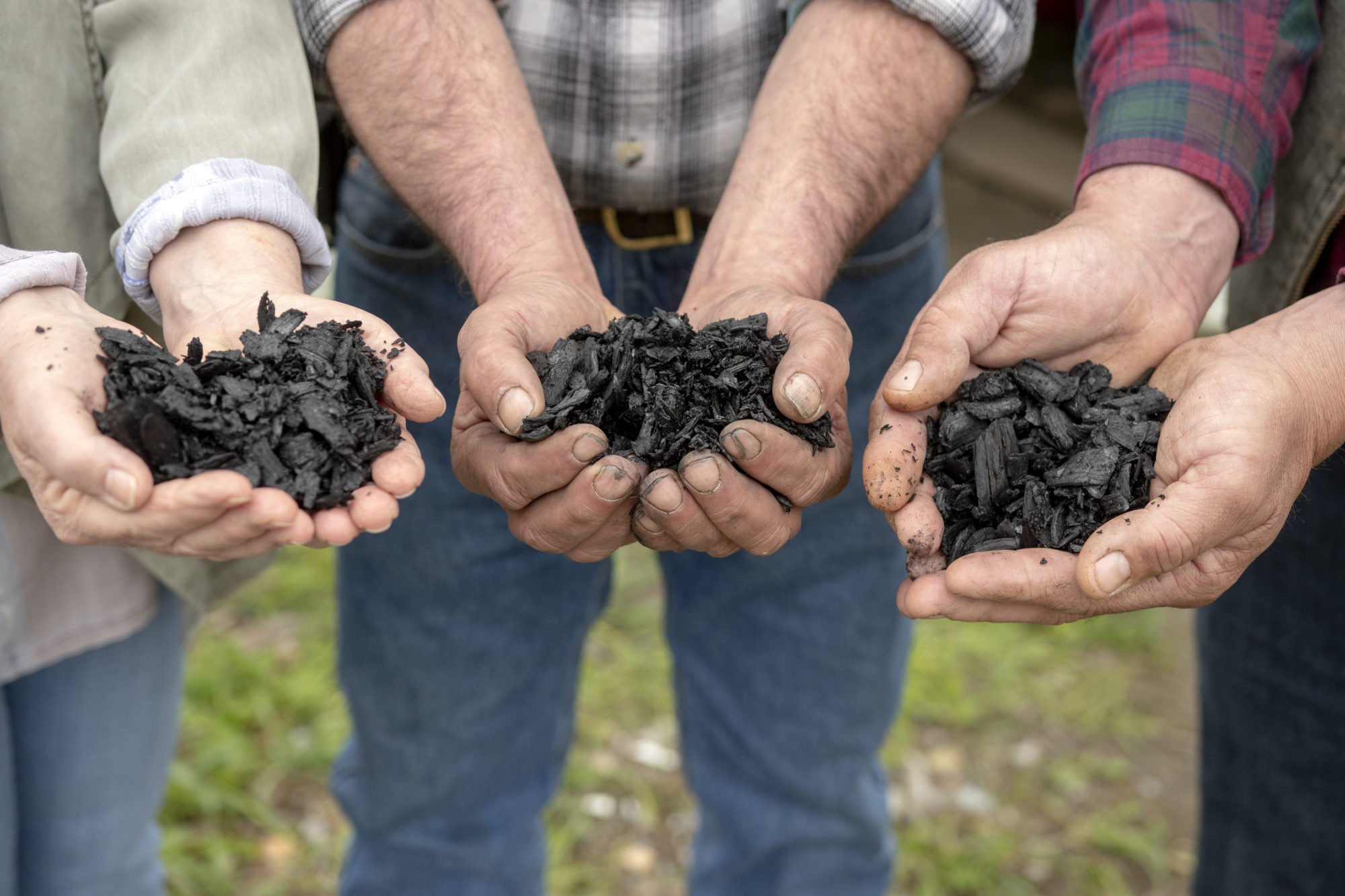 Luke Persons and Roger Pion wanted to start a business, preferably one that kept them connected to the forested working landscape in Vermont’s Northeast Kingdom. With backgrounds in logging, excavating and trucking, the friends had heard about an emerging market for biochar, but knew little about its production or use.

“They literally started watching YouTube videos,” said Donna Pion, co-founder of Green State Biochar. “By the time I’d finished reading through the research and working out a business model, Luke and Roger had already built a kiln.” Now, two years into production, Green State Biochar is one of a handful of regional producers bench testing applications and effectiveness in the northeast. “There’s a lot of academic research coming out of U.S. and global institutions including Cornell and Texas A & M,” said Pion. “We’re taking all that science and putting it into practice here in Vermont.”

Referred to as “black gold,” biochar is creating a buzz in the wood products industry. Produced through pyrolysis, biochar is a charcoal-like solid made from biomass that is being tested globally in applications ranging from soil amendment, to stormwater filtration, odor control on industrial poultry farms, carbon sequestration, animal feed, and even packaging materials.

“It’s actually an ancient process,” said Kathleen Draper, U.S. Director at the Ithaka Institute for Carbon Intelligence speaking in Hardwick at a Vermont Forest Industry Network Meet-Up this past March. “Indigenous communities around the world have been using biochar for centuries to reduce waste and enrich soil for agriculture. We are only now rediscovering its potential to improve water and air quality, and to harness carbon gasses that are contributing to climate change.”

Biochar can be made from any organic biomass—coconut shells, manure, hardwoods, softwoods, construction debris—and its use varies dramatically based on geography and feedstock composition. “In drought areas, biochar can be added to soil to improve water retention,” said Draper. “In China it’s being used to reduce agricultural waste. Here in Vermont, we are looking at its potential to absorb phosphorus. In fact, it’s versatility is a challenge because how it’s used depends entirely on the feedstock and that research is happening in real time.”

Back in Greensboro Bend, Roger and Donna Pion and Luke Persons, owners of Green State Biochar, are producing biochar from wood waste purchased at local sawmills including Goodridge Lumber and Piettes. “We started this business with a question: what problem can biochar solve in Vermont?” said Pion. “The decline in markets for low-grade wood has put a lot of pressure on the industry, so creating a new market was one answer, but there has to be value on the other end as well.” Through trial and error experimentation, they discovered that biochar made from Vermont hardwood and softwood feedstock has excellent absorption properties. Around that same time, Governor Scott launched the Phosphorus Innovation Challenge seeking ideas on how to reduce phosphorus runoff into Lake Champlain. “We saw potential right away,” said Pion. “So Luke and Roger set about designing, building and testing filtration systems.”

Phosphorus pollution is currently one of the biggest environmental challenges in Vermont, and in Lake Champlain specifically. Excessive amounts of phosphorus can cause harmful algae blooms, posing hazards to safe drinking water, fishing and recreation, and aquatic wildlife. A 2016 report by the EPA found that agriculture was responsible for an estimated 41% of base phosphorus in Lake Champlain.

Green State Biochar is betting that biochar may be part of the solution. A recipient of funding through phase one of the Phosphorus Innovation Challenge, the team installed filtration systems this spring in Cabot and Westfield to test the product’s effectiveness in capturing and retaining phosphorus. “We’re lab testing the biochar before and after, so we’ll know exactly what is being absorbed,” said Pion. Both sites were installed this spring to be tested during the heaviest periods of rain and snowmelt, and will remain in place until the biochar has reached its capacity to hold phosphorus, perhaps six months or more.

The real value proposition, however, lies in the fact that phosphate is an important nutrient used by Vermont farmers to build soil health. In and of itself, biochar is well-documented as a natural soil amendment that helps retains both water and nutrients, and Green State Biochar is hoping that the phosphorus-enriched biochar coming out of their filters in Cabot and Westfield will find a market among Vermont farmers. “We’re facilitating a very natural process and adding value along the way,” said Pion.

Soil as a Carbon Sink?

And if all that is not enough, soil enriched with biochar is also being touted for its ability to sequester carbon and reduce greenhouse gas emissions that are contributing to warming climate trends. The earth’s soil contains three times the amount of carbon in the atmosphere and four times the amount stored in all living plants and animals, making it a major player in global climate change. When organic matter is pyrolyzed, the carbon left behind is biochar. The production process essentially concentrates carbon that would have been released into the atmosphere as wood decays, reducing carbon emissions that would have been released into the atmosphere and replacing it with a stable product that captures carbon in the ground indefinitely. While research here is still emerging, a recent study out of Cornell showed that 12 percent of global greenhouse gas emissions could be offset with biochar.

Draper, who authored “Burn: Using Fire to Cool the Earth,” points to low awareness as one of the biggest challenges to the biochar field. “Maybe two in 100 have heard about it,” she said. “It’s a nuanced product for users and producers to understand, and globally people will have very different experiences with biochar based on its composition.” That said, Draper is convinced of the product’s potential to reduce greenhouse gas emissions. “Biochar can both sequester carbon in soil and reduce greenhouse gases when the energy produced during biochar production displaces energy formerly produced using fossil fuels,” she said. “It’s an emerging product, but the production side is growing globally and massive amounts of organic waste are finding a home that is carbon stable.”

This all works well with the business Green State Biochar hopes to build. “From the start, Luke and Roger wanted to stay connected to the forest, work outside, and do something good for the planet,” said Pion. If all goes according to plan, Pion sees a hyper-local business model that can be replicated regionally. “I don’t ever see us shipping plastic bags full of biochar around the country,” she said. “It makes more sense to move the entire model to new locations where feedstock can be purchased and biochar can be sold locally.”

But, for now, Green State Biochar is focused on the filtration systems and gathering data that will inform their business model moving forward, and expanding awareness about biochar and the role it might play in Vermont. For more information, please visit the Ithaka Institute, Green State Biochar, and the Phosphorus Innovation Challenge.

Vermont’s forest products industry generates an annual economic output of $1.4 billion and supports 10,500 jobs in forestry, logging, processing, specialty woodworking, construction and wood heating. Forest-based recreation adds an additional $1.9 billion and 10,000 jobs to Vermont’s economy. The Vermont Forest Industry Network creates the space for industry professionals from across the entire supply chain and trade association partners throughout the state to build stronger relationships and collaboration throughout the industry, including helping to promote new and existing markets for Vermont wood products, from high quality furniture to construction material to thermal biomass products such as chips and pellets. For more information please visit www.vsjf.org.